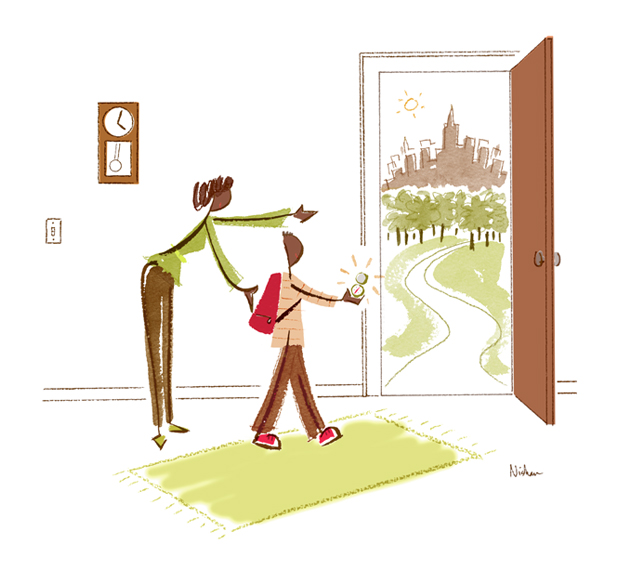 It takes years of practice and learning to see—really see—before an artist can conjure up vibrant scenes and characters with just a few graceful brush strokes. And, like a gold medal–winning ice skater, Nishan Akgulian‘s talent transcends his technique: He makes us believe his tricks are effortless.

It takes years of practice and learning to see—really see—before an artist can conjure up vibrant scenes and characters with just a few graceful brush strokes. And, like a gold medal–winning ice skater, Nishan Akgulian‘s talent transcends his technique: He makes us believe his tricks are effortless. Maybe that’s part of why he’s found such loyal fans in the readers of Working Mother—after all, who can appreciate the genius of making it all look easy more than a working mom?

We had a chance to work with Nishan on the illustrations for the Working Mom Survival Guide, and afterward I was curious to find out more about his process and inspiration.

I know a lot of moms (and dads!) who try hard to encourage their kids’ creativity. How about you—were you artistic when you were a kid?
For as long as I can remember I’ve loved to draw, to create things. I’ve always liked graphic design; even when I was single-digit in age I would save something because I liked the logo.

My father was an illustrator so I was exposed to all the creativity involved in the field. Though he primarily worked as an illustrator, he often referred to himself as a “commercial artist” so he also did all that was involved with that term: logo design, lettering, comps, mechanical renderings, everything done by hand.

Even when you start out with artistic genes and a great role model, breaking into the world of commercial illustration can still be tough. Was there a particular illustration assignment that gave you your first big break?
My career started in the mid-1980s, well before the Internet, even before an illustrator was expected to own a fax machine. I was walking all over New York trying to get started in the illustration business, dropping off my portfolio at so many places, and it was inevitably discouraging. Then one day I went to pick up my portfolio from Essence magazine and was told the art director wanted to see me. That was my first illustration assignment, a quarter-page illustration, and it was very encouraging. I started getting work after that, but the “big break” was several years later, for Sports Illustrated. It was several illustrations over many pages and it was a wonderful feeling to see my work in print in a major publication like that.

You’re also a fine artist. How does that differ from working on illustration projects?
There is a freedom with fine art that inherently isn’t available in illustration. Illustration is a team effort and I have an obligation to the client to communicate an idea on their behalf; that’s a part of the business that is very satisfying. In fine art, it’s all up to me. I might have a broader message I want to tell, but it may also just be about the joy of creating an image. But my illustration would not look like it does without doing fine art as well. The evolution in my illustration style owes a great deal to how my fine art evolves.

What else influences your work? Is there anything that inspires you over and over again?
At least since I’ve lived in New York City, it’s people on the subway. I never tire of observing the variety of the species we humans are, and I have yet to find a place as good for that as the New York City subway system. NYC really is a melting pot, and the subway is where everyone interacts with each other. There are no automobiles to hide inside, no walls to hide behind, everyone’s just thrown in a subway car together.

I also love the amount of art available to see here: the galleries and museums, even the auction houses when they have exhibitions before auctions. They’re constantly changing. Also, I love architecture and design, and there’s no lack of great examples of that in New York.

Were there any happy surprises when you were creating the illustrations for the Working Mom Survival Guide?
For one, I met some very nice art directors!

Aw, shucks, we’re flattered. Anything else surprise you?
The three-color process is a complicated way to create illustrations but it has a quality unique to itself when printed. The design team at Weldon Owen really pushed the boundaries of the process; there are times when it looks like a fourth or fifth color was used.

Where should fans look for your next piece?
I contribute regularly to Working Mother magazine, so I’ll have an illustration in the April-May issue!