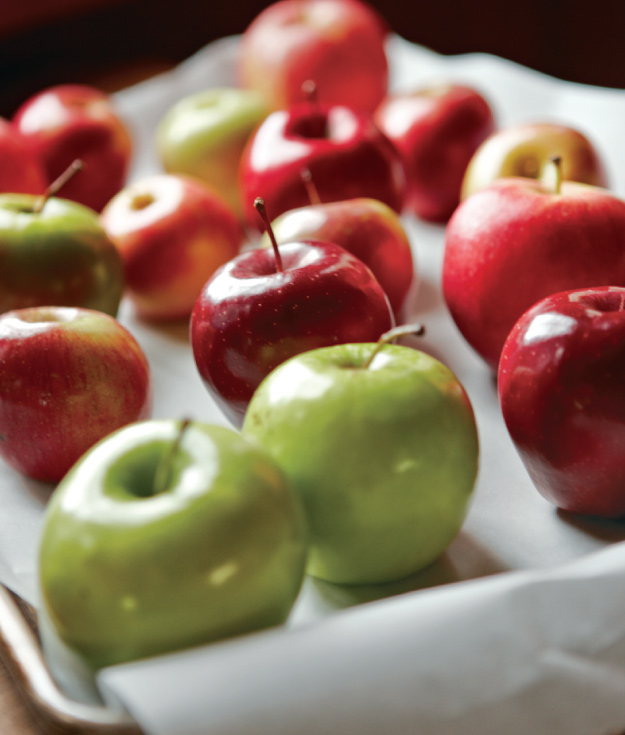 There are about 7,000 varieties of apples in the world, according to Cook’s Wisdom, so even if you tried a different apple every day it would take you nearly 20 years to sample the entire spectrum.

There are about 7,000 varieties of apples in the world, according to Cook’s Wisdom, so even if you tried a different apple every day it would take you nearly 20 years to sample the entire spectrum. However, this is an unlikely way to spend two decades because the most common varieties can actually be found in the U.S.—Red Delicious, Golden Delicious, Granny Smith, Gala, and McIntosh.

But how much do you actually know about apples? Certain apples are best for baking, while other varieties are most ideal for applesauce and eating out of hand.

You’re probably feeling a bit overwhelmed now that you know just how many varieties of apples exist! Well, rest easy, because this condensed list of the 18 most popular apple varieties breaks down the information every apple eater should know—how to cook them, best recipes, and when they are in season.

Red Delicious: A popular eating apple that looks just how we all imagine an apple should. Unfortunately, due to overlong storage or supermarkets’ selling the Red Delicious out of its natural season, many specimens have a mushy and tasteless flesh. Shop for your Red Delicious at a farmers’ market so that you can buy in season and taste before you buy. This apple cooks down well into applesauce but is not recommended for baking or frying.

Golden Delicious: Sweet, juicy, and mild, this is probably the most widely available apple, good for eating raw, frying, and making pies. Its flesh does not darken as readily as that of other apples, and it holds its shape during baking.

Granny Smith: Originally from Australia, this bright green apple boasts white, firm, juicy flesh that is sweet and tart at the same time. It is good for eating, sauteing, and baking.

Gala: Native to New Zealand, the Gala is pleasantly sweet and crisp with golden skin and a rosy overtone. It is best for eating raw, sauteing, or slow baking.

McIntosh: This is a fall favorite, with its red skin and crisp, white, juicy flesh. Macs, as they are affectionately known, have flesh that softens when cooked, making good applesauce.

Cortland: This red-skinned apple with snow-white flesh has a pleasing tartness and a firm texture. It is good for eating out of hand and for adding to fruit salads. Because it breaks down in cooking it is ideal for applesauce, although it is not as suitable for pies and the like.

Empire: Red or green-skinned, this juicy apple with a tart-sweet flavour and creamy flesh is a cross between Red Delicious and McIntosh. It’s good for applesauce and delicious eaten out of hand.

Fuji: The Fuji, with its yellowish-green skin and juicy white flesh, has a sweet and slightly spicy apple flavor. This apple, developed in Japan in the 1960’s, is particularly prized for eating out of hand.

Honeycrisp:  This large apple, with its streaks of red and green, has a juicy, crisp flesh and mellow flavor. Good for eating raw or for a wide variety of cooking methods.

Ida Red: A good-looking red apple with a hint of green, this mildly tart fruit is prized for baking and cooking.

Jonagold: This cross between the Jonathan and the Golden Delicious has red-streaked yellow skin and firm, sweet, juicy, white flesh. Use it for eating or cooking.

Jonathan: Most Jonathans are used for baking or cooking, although the golden apples with red stripes and juicy yellow flesh are good eaten raw too.

Pippin: The term pippin turns up in a number of apple names, but the best known of them is the Newton pippin, usually simply called pippin. This all-purpose apple, with its pale green or yellow skin and creamy flesh, has a bright, tart, full flavor and firm texture that makes it a favorite in pies.

Rhode Island Greening:  A lovely green apple with crisp, tart, juicy, green-toned flesh that is excellent for pies and applesauce, as well as for eating out of hand.

Rome Beauty: This large, red apple has sweet-tart, firm flesh and holds its shape well when baked, which explains why it is among the most popular apples for filling with sweet or savory stuffings and baking whole.

Winesap: Sometimes called a Stayman Winesap, this dark red apple has firm, crisp flesh and a sweet, winy flavor, chracteristics that give it a loyal following among apple afficionados. It is not a good keeper, however, losing its crispness quickly. Its recommend it for eating raw and for cooking.

Now you know the best apple to pack in your lunch and the best one to pick for a pie, we hope this helps you make the best of the harvest!